Biden will hold a big climate summit this week to reestablish U.S. leadership. Not everyone may follow. 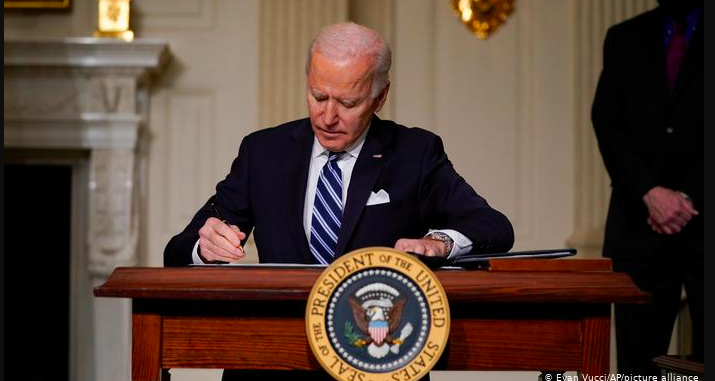 Biden will hold a big climate summit this week to reestablish U.S. leadership. Not everyone may follow.

Washington Post –  President Biden will convene dozens of world leaders this week for a virtual climate change summit, marking not only an effort to restart the global push to address the rising threat but also the new president’s first grand gesture as a world leader.

Biden is using a two-day session opening Thursday — Earth Day — to put the United States back at the front of efforts to counter climate change after the retrenchment under President Donald Trump. More broadly, Biden seeks to trumpet that the United States has returned to the forefront of world affairs, from the environment to human rights to global security.

But it’s far from certain that other nations will follow suit if Biden pledges, as expected, that the United States will aim to significantly cut emissions, given the logistical and economic challenges of doing so. That makes the summit a political and diplomatic risk.

Beyond that, this is the first time a global summit has been held virtually and live-streamed around the world, and it is difficult to predict what various world leaders, especially those who relish tweaking the United States, will say when given the opportunity.

Biden has already rejoined the Paris climate accord that Trump renounced and signed a slate of executive orders to reverse his predecessor’s environmental and climate decisions. But officials, activists and allies describe this week’s meeting of approximately 40 leaders as Biden’s first major effort beyond wiping away Trump’s policies.

“The president wanted to convene this summit early in his presidency to ensure close coordination with key players in the international community and at the highest levels of government,” said White House press secretary Jen Psaki. “Obviously, the United States is one of the world’s largest emitters, but so are a number of countries who will be represented.”

She said the session, which will feature speeches, scientific presentations and smaller virtual “breakout sessions,” would address technological innovation, job creation and ways to pay for the far-reaching changes needed to slow the pace of climate change.

Yet the perils for Biden are clear, while the summit unfolds, as he is trying to steer the United States past the coronavirus pandemic and navigate disputes with the leaders he has invited, including Russian President Vladimir Putin and Chinese President Xi Jinping.

Biden also risks raising expectations among close allies, especially in Europe, who are delighted by the U.S. turnabout but skeptical about its long-term commitments in a volatile American political environment. The summit will examine ways to reduce warming through the rest of this decade, a span longer than Biden will be in office.

“The rest of the world was deeply relieved” when Biden rejoined the Paris accord, said Rachel Kyte, dean of the Fletcher School of Law and Diplomacy at Tufts University. “But the rest of the world also knows that the United States has a political system that means that it could leave again.”

The summit will be of little value, Kyte said, unless Biden’s updated climate pledge is sufficiently ambitious. Only that will give the administration credibility to keep pushing other major economies to follow suit ahead of a key United Nations climate conference this fall in Scotland.

The administration’s expected aggressive plan to cut U.S. emissions — probably around 50 percent by the end of the decade, compared with 2005 levels — has been telegraphed by officials for weeks. It would basically double the goal first put forward by President Barack Obama as part of the 2015 Paris climate agreement.

The hope is that such an ambitious U.S. pledge would give Biden and European allies more leverage with other key countries, such as China, Russia, India and Brazil. While the United States remains the world’s second-largest emitter, roughly 85 percent of global emissions now come from other nations.

Some Biden advisers hope that other top emitters will show up with bolder promises this week, but it is not clear that any will.

“This is a crucial early moment, and it’s a moment for the U.S. to shine, to show it’s really committed,” said Rachel Cleetus, policy director of the climate and energy program at the Union of Concerned Scientists. “This is a moment not just for rhetoric about leadership. We have to lead by example.”

Her group is among a growing number of voices that have pushed the Biden administration not only to declare that the United States intends to lead on climate, but to do so in a big way.

More than 300 businesses, including Apple, Starbucks and Walmart, wrote an open letter to Biden recently asking for a bold pledge.

Environmental groups, Democratic lawmakers and other world leaders have expressed similar expectations, saying Biden needs to put the United States on par with the sort of aggressive promises the United Kingdom and the European Union already have locked in.

“Rejoining [Paris] is not enough. We have to show the world that we are willing to contribute in a robust way” that won’t be undone, Cleetus said.

Biden’s effort and the new target come as the president is trying to secure billions from Congress for infrastructure, job creation and pandemic recovery, including funding for some of the practical shifts required for the country to attempt a major emissions cut. Additional money would also be required, along with changes in behavior and priorities for American businesses, workers, families and governments.

A U.N. climate report released Monday described a “relentless” worsening of climate conditions in 2020 and concluded that the coronavirus pandemic has done little to slow the warming of the planet.

U.N. Secretary General António Guterres asked countries to commit to a target similar to the one Biden will probably endorse: a cut in global emissions of 45 percent by 2030. “The climate is changing, and the impacts are already too costly for people and the planet,” Guterres said Monday.

At a news conference, Guterres welcomed a joint statement over the weekend that pledged U.S.-Chinese cooperation on climate change.

The United States and China, the world’s two biggest carbon polluters, agreed to address climate change with “seriousness and urgency” during talks last week between Biden’s climate envoy, John F. Kerry, and a counterpart from China.

China and U.S. agree to work together on climate despite other tensions

In Europe, Biden’s election has been greeted with relief.

For four years, Europeans stood largely alone on climate issues as Trump pulled the United States out of any leadership role. They talked to Beijing about potential goals, but few European policymakers felt they had much sway without Washington’s participation.

Now Europeans see a new chance to seize the moment, especially as Biden also seeks to mend other irritations from the Trump years. They say that their long-term goals — to completely decarbonize their economies by 2050 — for the first time line up with U.S. ambitions, thanks to Biden.

“When you look at the dependency of China on exports, you see that if we set new standards to access the E.U. and the U.S. market, the two of them amounting to 40 percent of the global economy, then it will have a direct impact on China,” said Pascal Canfin, a French lawmaker who heads the environment committee of the European Parliament and is an ally of Macron. China “will have to change its process to comply,” he said.

European allies have greeted Kerry’s involvement with similar enthusiasm. He is well known to European leaders from his tenure as Obama’s second-term secretary of state. Some top policymakers said they trade text messages with Kerry about strategy and believe they have an advocate in the White House.

Kerry has already begun traveling around the world, including recently to China, to make the case that the Biden administration is serious about rejoining the climate fight in a big way and to urge other countries to take part.

Some nations that are still industrializing have been reluctant to make major commitments to cut emissions. But European officials said the combined forces of the United States and Europe will have a powerful influence.

“It will be quite an effort to convince other major players in the world to do the right thing,” the top E.U. climate official, European Commission Vice President Frans Timmermans, said when Kerry visited Brussels last month. “But I am absolutely convinced that the United States and Europe working together, we can move mountains and make sure we hand over a climate our children and grandchildren can live in.”

Christiana Figueres, a former U.N. climate chief who oversaw the Paris agreement negotiations in 2015, said Biden has already gone a long way toward establishing American bona fides by rejoining the compact. Doing so was a key part of Biden’s 2020 presidential campaign platform.

“On the other hand, four years went by, and in those for years, the science has become much more granular, and we understand the urgency much more than we did,” so signing back up to the Paris goals won’t be enough, Figueres said.

The new U.S. emissions target will help, and most other nations will welcome seeing Biden take some responsibility for the United States having fallen short in the past, she said.

“Everybody understands that democracy has a price,” she added. “I think actually there will be excitement and gratitude that U.S. is finally sitting at the adult table again.”

Birnbaum reported from Chicago. Quentin Ariès in Brussels contributed to this report.